A flower journey though Amsterdam … and beyond. 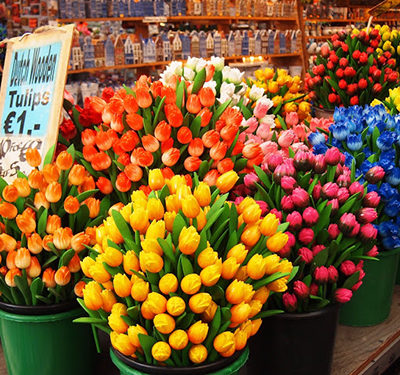 In 1994 as a non-traditional college undergrad, I spent three months in the Netherlands as an InterFuture scholar, conducting cross-cultural research. As academic as this may sound, it morphed into a color infused floral extravaganza, and one that opened my senses to the wonders of the Netherlands.

I arrived in Amsterdam in late January, and while the Dutch do not have as dramatic snowfalls and drastic dips in temperature that we experience here in Northern New England, it was still quite cold and gray. Towards the middle of March though, the sun began to rise a bit higher and the flower markets had more colors and varieties to choose from, especially tulips – buckets and buckets of tulips, in yellow, violet, orange, purple, red… a full kaleidoscope.

Oh, I just love tulips and the Dutch do tulips right!

One spring Saturday afternoon as I was walking across Amsterdam to my Oosterpark apartment, I wandered through the local flower market, one of many sprinkled throughout the neighborhoods of the city. It was closing time and they wouldn’t be opening again until Monday morning. As I cut through the back of the market I noticed a man loading bundles of tulips into a garbage truck. He wasn’t just tossing them in either, but was carefully arranging them as a florist would do.

I remember, they were all the same color, bright red with yellow tips, and neatly bundled in packs of twelve, each pack containing one dozen tulips. 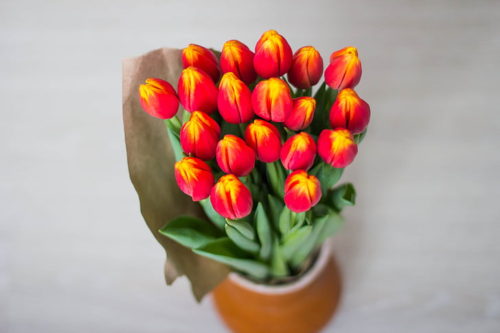 I stopped to ask him what he was doing. He told me that these flowers were already too far along to be sold on Monday. I then asked him if I could have some. He smiled and handed me as many as I could carry, four or five bundles with each bundle containing a dozen dozen blooms, that’s hundreds and hundreds of tulips!

I scurried home, giving tulips away to strangers, a local pub and restaurant, my neighbors, and still was able to fill my apartment with the rest magyargenerikus.com. Remembering the gift of these discarded tulips brings a smile to my face. It remains one of the most spontaneous and joyous days of my life.

If you love flowers and you’ve never been, spring is when you need to visit the Netherlands. While traveling on the train to conduct my research, I sped past a blur of color, fields and fields of flowering tulips.

One morning I took a tour of the Aalsmeer Flower Auction. It is like the New York Stock Exchange, but instead of stocks and bonds, buyers from around Europe attend and trade around 20 million flowers and decorative plants daily. As a visitor to the Aalsmeer flower auction, I was able to witness the flurry of activity from an elevated walkway above the busy warehouse. Once sold, wagons and containers are sorted and sent to the shops, further distribution centers, or for export. Aalsmeer is said to have run short on supply of flowers after the death of Princess Diana, as up to 60 million flowers were scattered throughout London to honor her.

As I was in Holland through the end of April and my birthday is the 26th, I decided to celebrate and wander through the famous Keukenhof Gardens, an international and independent showcase. As I recall it was one of my most fragrant and colorful birthdays to date.

My travels have taken me to many other world-renowned gardens, including Kew Gardens in London, the Summer Palace Gardens in Beijing, and the Kirstenbosch Gardens near Cape Town, South Africa. And then there are my favorites closer to home, including our own Coastal Maine Botanical Garden in Booth Bay, the Montreal Botanical Garden in Quebec, Asticou and Thuyla gardens on Mount Desert Island, and the Crescent Street Garden in Portland.

Should be obvious by now that gardens and flowers bring me joy… I hope this is true for you too. Cheers to you, your garden, and your appreciation of gardens here, there, and everywhere. 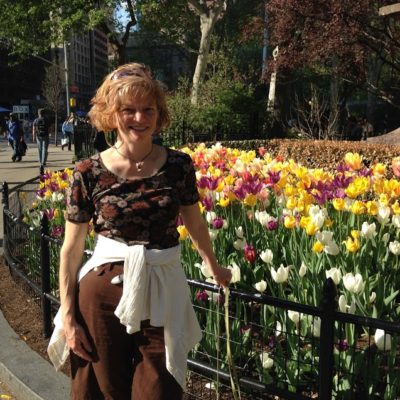